I’m not a social media maven, but I listen to what others are doing on twitter and pay attention to their reactions. In a 3 month period, I went from 250 followers, to over 2,300 followers. Specifically, I delved into how artists and illustrators are viewed and followed on twitter.

These are guidelines I’ve developed over the past few months that I’ve been actively using twitter. This list is certainly not meant to apply to everyone, but has worked for me.

1. Be yourself. Discover what your voice on twitter is, and use that voice 100% of the time in your tweets. Be careful not to appear too negative. Being creative 24/7 can be frustrating, but constantly looking frustrated on your twitter feed appears unprofessional and juvenile.

2. Do follow people you are genuinely interested in. Don’t be afraid to follow too many people. The more you follow, the more likely people are to find you. As an artist, I chose to follow specific museums, magazine and book publishers, art and design blogs, as well as other great artists.

3. Listen to the audience your tweets would apply to, and take note of what others on twitter commonly do, specifically those you look up to in your field. Since I wanted to use twitter primary as an illustrator, I made sure to look at popular twitter accounts by illustrators. Try to find what about his or her feed makes it popular, and see how that might apply to you.

4. Tweet often. I aim to tweet about 3 times in a day about 1 to 3 hours apart. This keeps the twitter feed looking fresh without posting so much that you become annoying to your followers. Be careful not to just post a tweet for the sake of posting. Always talk about, link to, and feature interesting and engaging content. Your tweet is like a headline. If it’s not interesting enough, it will be ignored. When perusing twitter, I looked for tweets with amazing images or art projects which mentioned the artist. If I found the work truly inspiring, I would tweet the link or image with a sentence on what it was about and what my opinion of the work was. As a courtesy, I would also mention the original artist in my tweet. Promoting other great artists is a good practice. Any artist greatly appreciates when you help promote his or her work. It may also spark a great conversation with the artist.

5. Make sure to self-promote as well as interact with other people. This is a social media website that spurs communication, not a one-way radio broadcast. Self-promotion may be your end goal, but shamelessly promoting too often can turn people off. Try linking to an informative blog post you wrote. As an artist, I try to explain my art process whenever possible. It will help other artists and can help establish you as a knowledgeable person on the subject. For example, create a “How-to” video showing how you got to your finished artwork.

6. Mention people in tweets you would like to talk to about something specific. Randomly adding people to a tweet will look like spam. Engage with everyone that mentions you, whether it was a good comment, a bad comment or a question. Selectively engage with people who favorite your tweets. Clearly they liked what you said, they may be open to having a conversation with you. As a general guideline, try to think more about having meaningful conversations and less about making a sale. It will help you look more personable and human.

7. Mention topics in a tweet. Topics are also commonly referred to as hash-tags, and look like this, #art. Make sure the topics you choose are relevant to what you are talking about. Randomly tacking on every buzz topic you’ve heard will also look like spam. Try to limit it to 3 topics at the most. As an illustrator, I used topics like #illustration, #painting, and #art. These may seem very obvious, but once I started using topics appropriately in my tweets, it made a huge difference.

9. Make lists of twitter accounts you find yourself constantly going back to. For example, I made a list of my favorite twitter feeds by illustrators, and titled it Inspiring Illustrators.

10. Aim to get real twitter followers, not mindless, inactive robots. Be conscious that many twitter accounts you see are fake. They are either represented by companies to gain a bigger follower base or are hackers attempting to gain personal information and/or access to your twitter account. This becomes more apparent when you look at an account that’s followed by thousands or millions of people. Many of those followers aren’t attached to an account with a real person. For example, a twitter account with many followers but no tweets, may be a robot. A twitter account that only retweets from other accounts and has no original content, may also be a robot.

On a softer note, try not to obsesses about people who unfollow you. People can choose who to follow and who to not follow based on what someone has in their twitter feed. It is just honesty. Please don’t hate them for it.

I hope this list helps you be more successful on twitter. Good luck!
If you have any questions, comments, or feedback, please use the comment field below.

Key To The Universe – Sonic Screwdriver Painting by Nicole Cleary

3. Disarming fusion bombs by reversing the polarity of the neutron-flow

4. Disabling a weakened Cyberman at a distance

Max Kostenko is an illustrator and character designer from Moscow, Russia and has made a serious splash for one only working in the industry for about 4 years. His prestigious client list includes Visa, Saatchi & Saatchi, Volkswagen, and Mercedes. For an artist who prefers to create his artwork with digital tools, Max’s style is surprisingly painterly – rich with detailed texturing of skin and clothing. Max Kostenko’s illustrations stand-out among the large pool of other character designers with his ability to create original subjects which portray interesting and relate-able personalities, as well as fully-realized environments for his characters.
END_OF_DOCUMENT_TOKEN_TO_BE_REPLACED

When spring is in the air, flowers leap from of the ground as if the flower’s stem was a coiled spring. That’s the inspiration for the illustration I created below. The refreshing nature of spring and the beautiful environment it creates is mirrored by the vibrant colors and the playful movement of this piece. 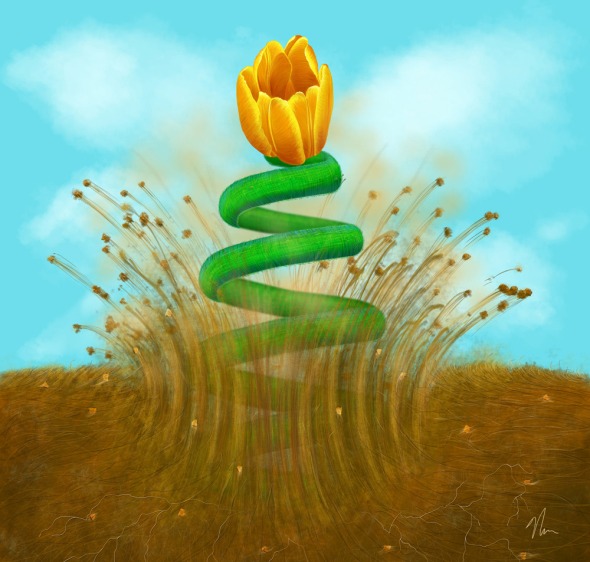 END_OF_DOCUMENT_TOKEN_TO_BE_REPLACED

Long distance space travel is an idea that needs to be more than an idea. This painting refers back to both seeing the cosmos through a lens in the safety of our home on earth and imagines forward to a time when we can reach out and experience the images with our own eyes.
Video of satellites that have gone deep into space. Images of what we imagine is further out there. Its inspiring, but yet its a tease. So close yet so far. How different would it feel if you were in a ship driving towards the outskirts of the universe. Or seeing these images for yourself by floating just outside the ship experiencing the vastness of space in an uncharted area. I created this work to live in to time periods. The one we live in now, and the one I hope to see in my life time … out the window of a long distance voyage.
END_OF_DOCUMENT_TOKEN_TO_BE_REPLACED

Where does all music end up?

A massive amount of music is created and brought into the world every day. Some songs become hits and are played over and over again, but most music we never hear. Thousands of musical masterpieces get lost in the din and disappear.

This was the concept behind the illustration I created below titled “Music Void”.

END_OF_DOCUMENT_TOKEN_TO_BE_REPLACED

Caitlin Hackett is a traditional artist in my home borough of Brooklyn NY with a truly interesting style. Almost all of her illustrations start off with drawing all the lines with a ball-point pen on a large piece of paper. The size of which ranges anywhere between 4in by 6in to a baffling 4 1/2ft by 5ft. After Caitlin lays out each individual line, she goes back in with colored pencil and watercolor to add shading and depth. This technique that she has clearly mastered is a pain-staking process but yields amazing results. The final piece marries crisp, flowing line-work with subtle bleeds of color. Her technique alone is a work of art, but the roots of her inspiration behind the artwork creates a whole other level of interest.
END_OF_DOCUMENT_TOKEN_TO_BE_REPLACED